Pea and Pearl Couscous Bouillabaisse with Shrimp and Seared Halibut

Jump to Recipe Jump to Video 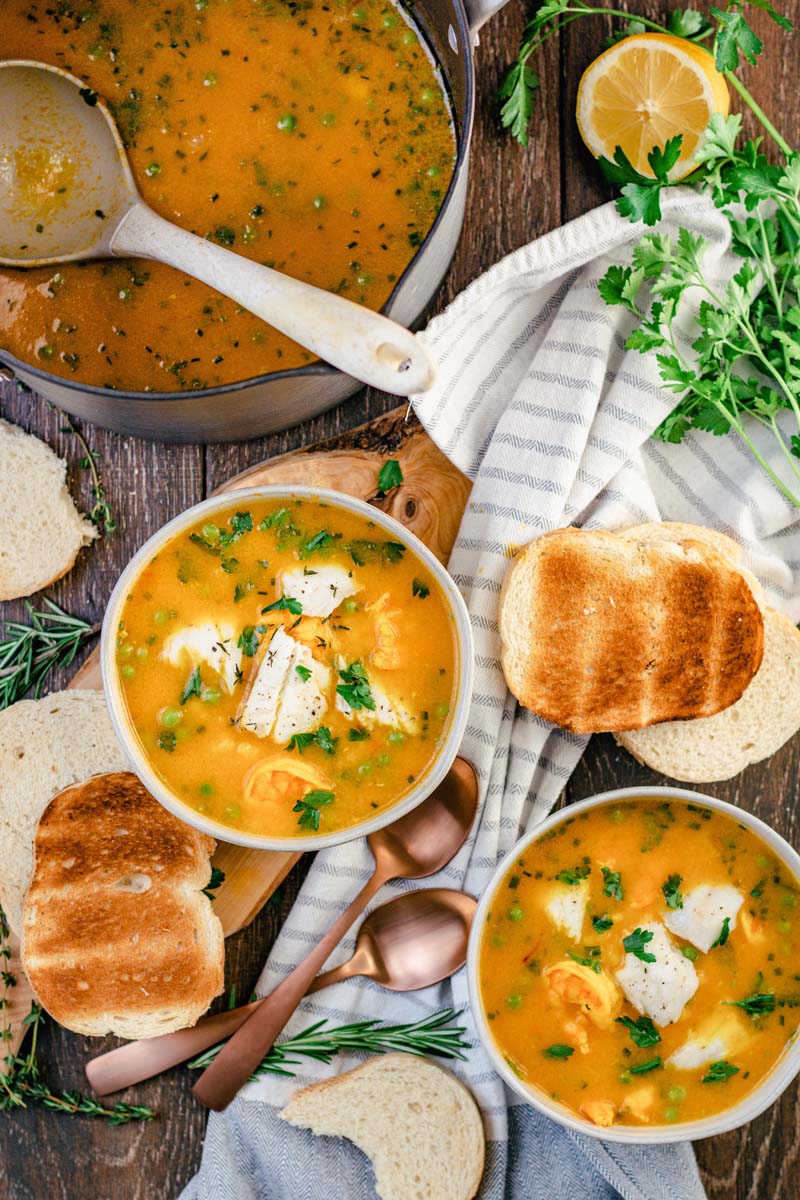 Nothing quite warms you up in the wintertime like a big bowl of bouillabaisse, pronounced “boo-yah-beis.”

So, I know bouillabaisse is not traditionally Parisian, but it is a dish found on several menus in Paris. Chefs born to the traditions of the French riviera migrated their obsession with this seafood stew from the Southern countryside to Northern city dwellers. This dish, originally from the port city of Marseille, is enjoyed by the masses of France regardless of where one dwells.

Its most traditional form includes tomato, saffron, and fennel blended with fish stock and served with an array of shellfish, including clams, mussels, and chunks of fleshy white fish. Traditional means many things in the South of France. Everyone’s family seems to have a different interpretation of an “authentic” bouillabaisse. Regardless, we have studied a few of the best versions, discussed “the technical” parts with some great cooks, and spent time in the South of France, eating our way through a stew after stew.

For this recipe, we employ traditional techniques and flavors for the stock and bouillabaisse, but our version is reinvented with toasted Israeli pearl couscous and crisp green peas.

What Is Bouquet Garni?

It is a mixture of herbs tied up into a cheesecloth with a strand of twine or string, which originated in France. One may use either dried or fresh herbs in a bouquet garni; however, we employ fresh herbs for our recipe.

For more information, check out our post, “How to Make and Use Bouquet Garni.” 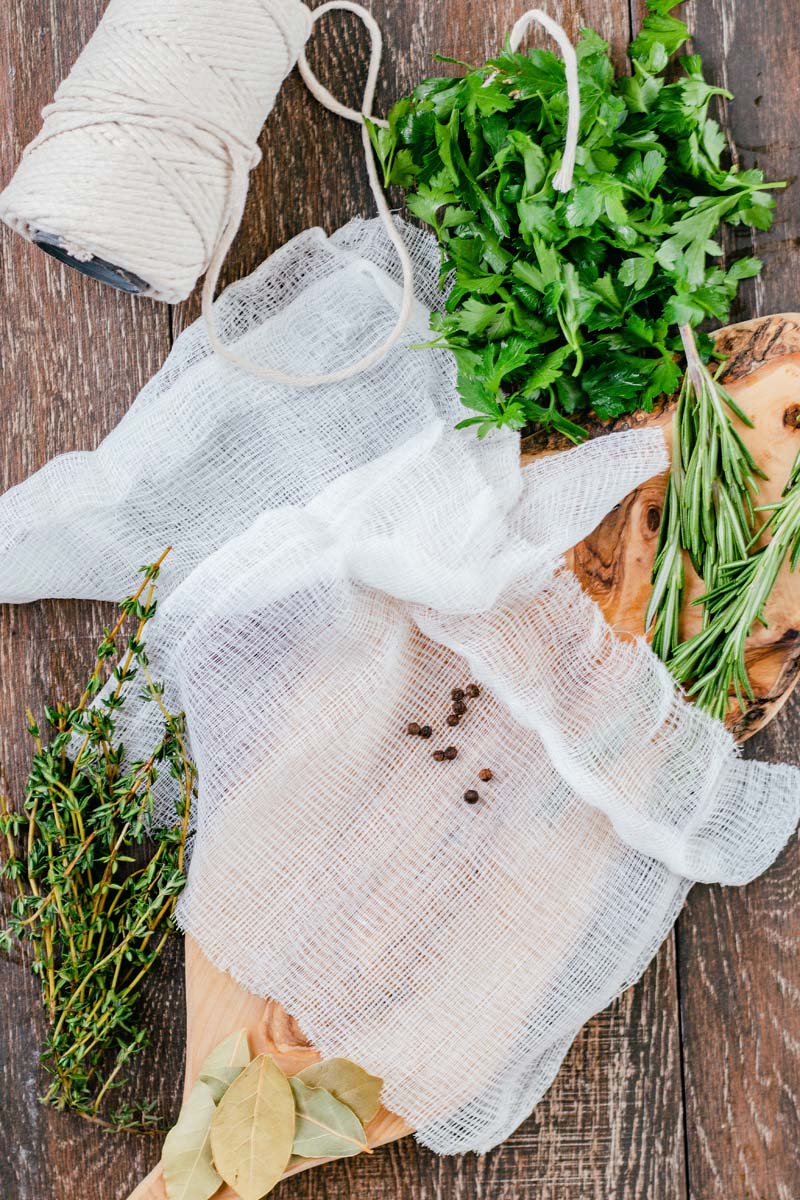 Fish fumet is fish stock made from fish bones. For a fish fumet, boil onions, carrots, celery, bouquet garni, and fish bones in water for one hour. You may purchase fish stock for this recipe, but traditional methods encourage cooking up one’s own stock.

Visit the following section to learn what types of fish to use for your fumet. 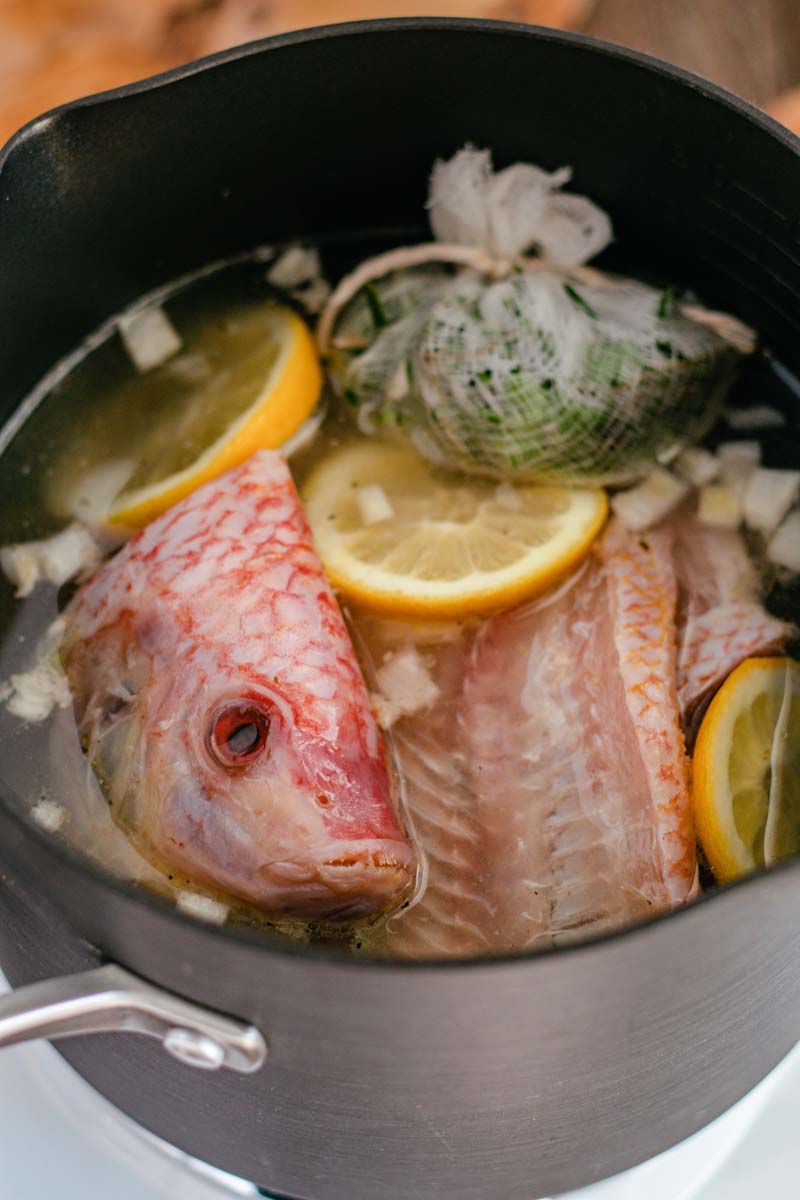 Types of Fish to Use in the Fumet

We picked up some red snapper for this recipe. We use the heads and the bones to flavor the fumet. You may choose to use red snapper; however, the following other types of white fish are great alternatives: 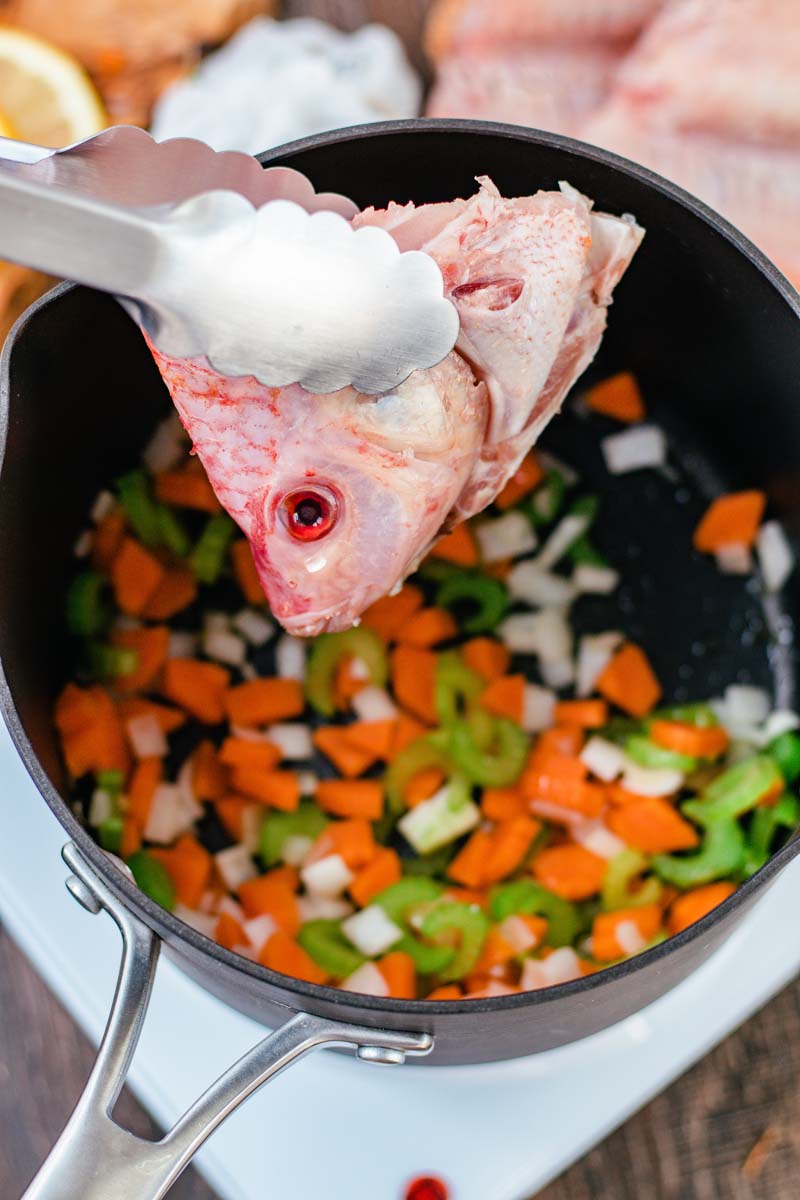 Clean and Debone Your Fish

We removed the filets and the cheeks from the snapper and cooked them up for a hearty snack.

You may purchase fish bones directly from the fish store. However, we recommend you buy a couple of whole fish, remove the scales, skin, and fins, chop off the heads, remove the meaty bits, and use the remainder in the stock. The fish heads themselves add a ton of flavor! Ensure you have a sharp knife and scissors handy for this exercise.

Check out this video to learn how to clean, fillet, and debone a fish. For more tips and tricks on cooking up fish fumet, check out our post “How to Make Fish Fumet.” 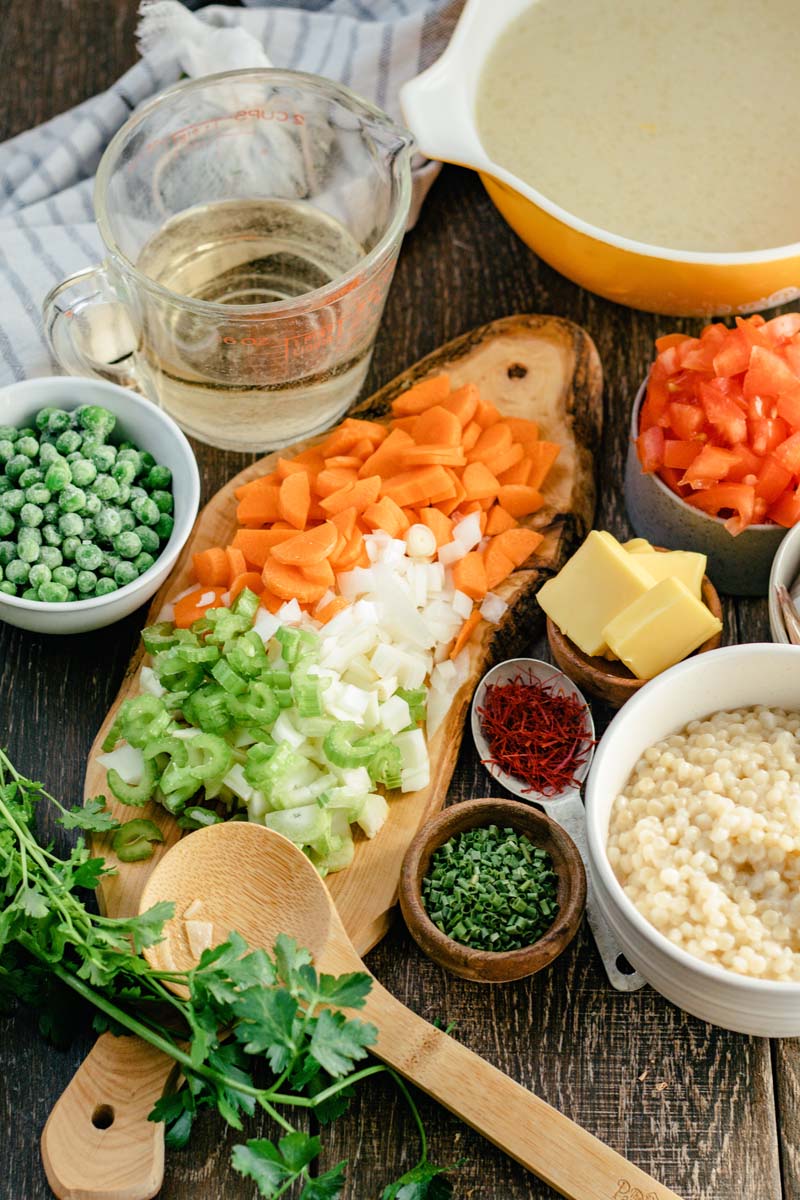 Add Seafood if Your Heart Desires

Bouillabaisse typically has various types of seafood such as prawns, mussels, and clams cooked in the blended bouillabaisse once it is done.

We decided to take a different spin with this recipe that you would desire to eat night after night by adding pearl couscous and peas. The peas and toasted couscous add some sweetness that plays well the fishy flavor while adding a textural component. Instead of amping up the fishy taste, we decided to serve it with a seared buttery halibut and juicy shrimp to balance that fishiness.

Nevertheless, if you are missing those other seafood flavors, feel free to add them. The following are noteworthy additions:

This process adds a nutty flavor to the couscous and the dish generally. To achieve this result, sauté dry couscous in a saucepan in olive oil over medium heat. Several of the couscous pearls will become brown in color. When most of the pearls turn brown, the couscous is ready to be cooked in water. Be careful not to burn them during the toasting process.

Subsequently, add the water and cook them for approximately 10-12 minutes. Cook them until al dente. If they have reached al dente consistency and the water has not yet evaporated, strain the leftover water. Overcooked couscous becomes mushy and displeasing. 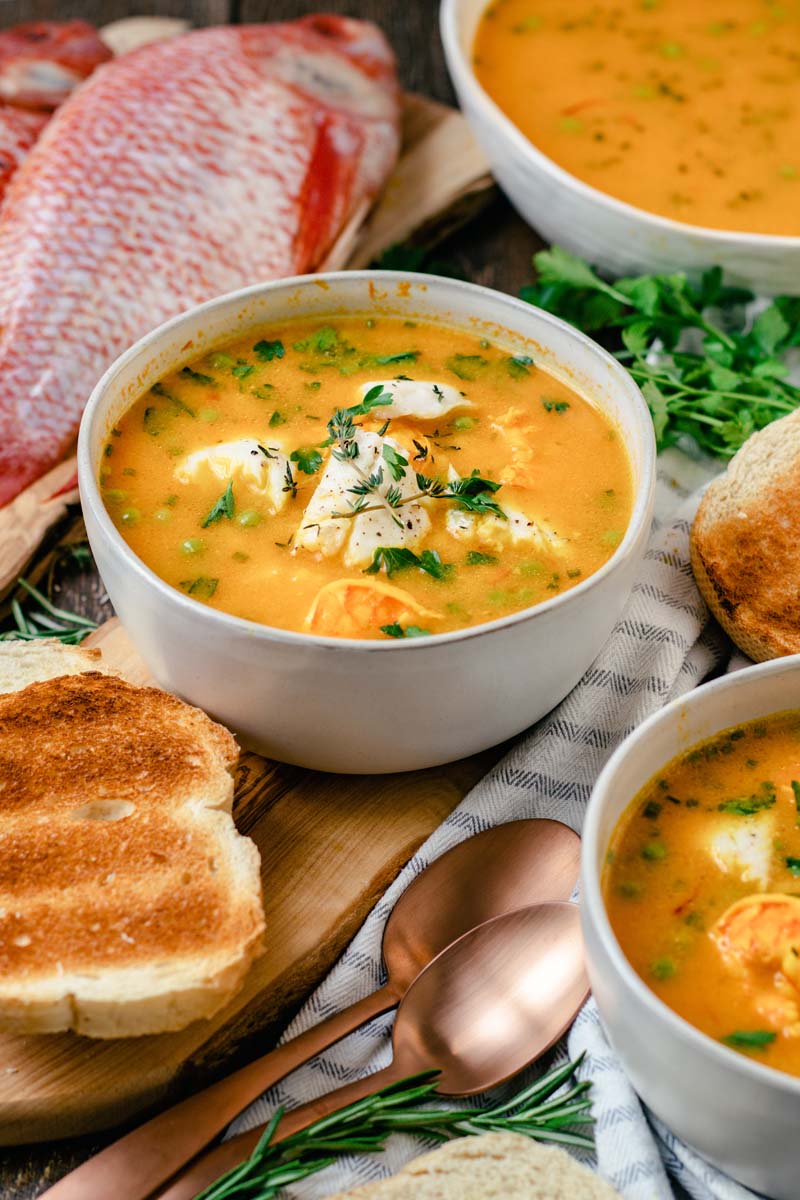 If you are not planning on eating the entire pot of bouillabaisse, then store bouillabaisse once blended in an airtight container in the freezer. You may store it in the freezer and consume it for up to 2 months following storage.

For leftover bouillabaisse, refrigerate it in an airtight container and consume for up to 4 days. Reheat it in a saucepan on the stovetop at medium heat.

Visit your local liquor store and request a bottle featuring these characteristics to find the perfect pair. 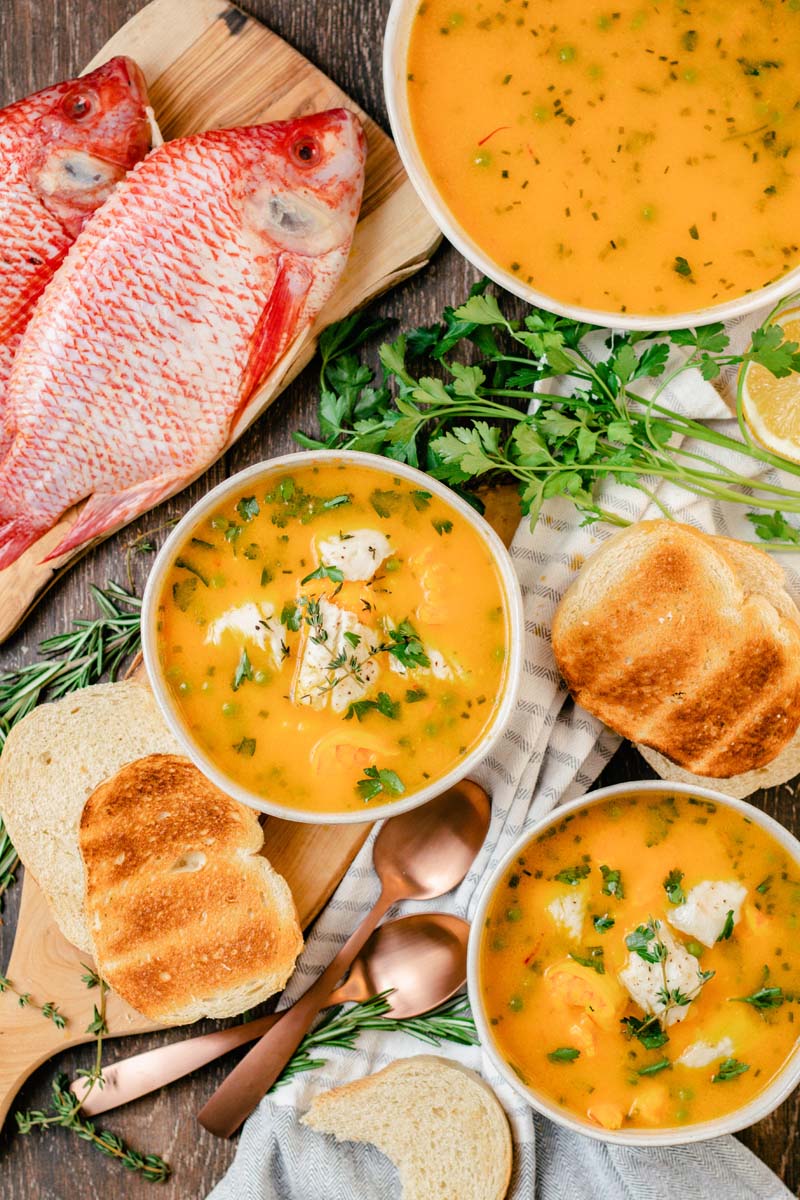 You just finished devouring our pea and pearl couscous bouillabaisse with seared halibut, and you are left with the following ingredients:

Additionally, purge your fridge of the remaining ingredients with our Asparagus and Mushroom Pearl Couscous Salad with Zhoug Dressing. 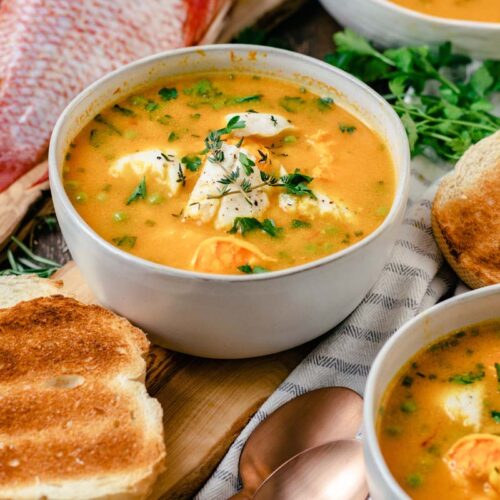 4. Cook the Vegetables for the Bouillabaisse

8. Cook the Shrimp or Prawns 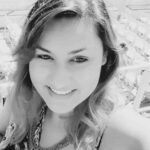 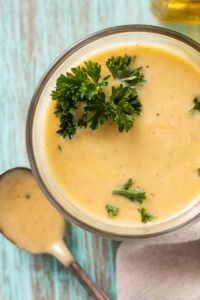 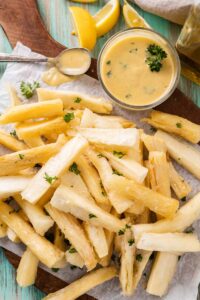 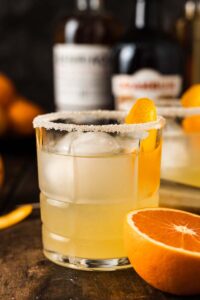 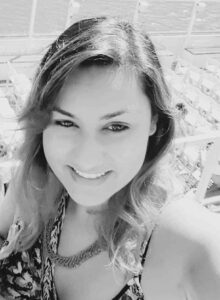 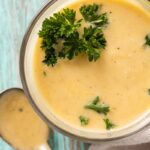 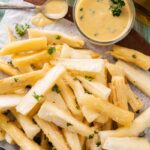 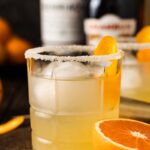 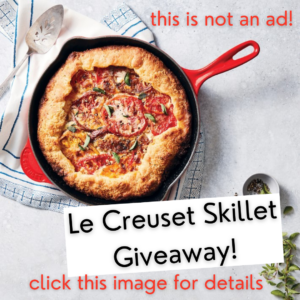